Outcome 1: Provide information resources in any format as appropriate with a preference for resources in electronic form.

Outcome 2: Maintain commitment to, and investment in, non-ownership based information-access strategies, such as

Outcome 2: Support a clear and streamlined workflow for the archiving and open-access publication of electronic theses and dissertations (ETDs).

Outcome 1: Collaborate with Writing faculty to integrate information literacy skills into Writing 10 curriculum in order to develop students who think like researchers.

More specifically, students participating in Writing 10 sections crafted around integrating the research process with the writing process (TRAIL sections) will:

Of students participating in a course-integrated model of library instruction:

Seventy-five percent of students in biennial focus groups will respond that they are “satisfied” or “very satisfied” with the library’s information resources.

In spring 2015, library staff did not conduct focus groups with students.  However, findings from spring 2014 focus groups indicated that students were impressed by our collections and reported using a variety of databases.   Eighty-six percent (12/14) participants were either very satisfied or satisfied with the library’s resources. Additional data from the 2015 graduating student survey, administered by Institutional Research and Decision Support (IRDS), measured the satisfaction levels of undergraduate students with library information resource.  One question on the survey asked students to indicate their level of agreement with the following statement:  The information resources provided by the library supported my academic success. Of the respondents, 87% strongly agree or agree (n=311).  This finding is very similar to the previous year’s focus group findings even though two questions are not exactly the same.  Overall there appears to be a high level of satisfaction with the library’s collection from the undergraduate point of view.  At the same time, we do not want to disregard that 13% disagree or strongly disagreed (n=47) with the statement on the graduating student survey.

UC Merced Library will be at or above the median for percentage of total budget expended on information resources as compared to the other UC libraries.

With the exception of Holidays, the average time for physical materials to be on the shelf with their records loaded into OCLC WorldCat was one to two days.

The library will continue to support open access publishing by UC Merced faculty and/or graduate students.

The library continued to support open-access publishing at the university through a number of activities in 2014-2015.  In fall 2014, Donald Barclay and Susan Mikkelsen met with campus By-Law unit heads and attended a faculty senate meeting to share information about the University of California Open Access (OA) policy which went into effect at UC Merced during the month of November. In addition, Susan Mikkelsen worked with the UC Merced Office of Communications to produce several open access videos featuring faculty perspectives on OA publishing.

In spring 2015 the library provided support to graduate students and postdoctoral scholars for open access publishing.  The goal of the program was to support emerging scholars who had an interest in, but not necessarily the means to, make their research open to the public in fully open access journals.  The library awarded $4925 to three individuals between January 1, 2015 and July 1, 2015.  See http://libguides.ucmerced.edu/open-access-fund for program details.

In spring 2015 the library, as part of a broader UC effort, also surveyed UC Merced faculty who had received funding from the library to publish in OA journals in 2013-2014. Susan Mikkelsen distributed this survey and six of eleven faculty responded.  Their responses and comments are captured in the following survey report and will be used to further campus conversations around funding models for OA publications.

Also, UC Merced librarians met with faculty to familiarize them with the forthcoming implementation of the open access policy passed by the UC Academic Senate. The UC Merced Library worked with the California Digital Library to prepare for the launch of the UC open access harvester tool, scheduled to go live on October 15, 2015.

Of students participating in a course-integrated model of library instruction (the TRAIL Program).

80% will express the knowledge, skills, and attitudes representative of an advanced or developing student researcher based on their reflective writing evaluated via rubric.

80% will perform at the advanced or developing level on their final papers in WRI 10 (source suitability, multiple viewpoints / evidence) as evaluated by a rubric.

Merritt Writing Program (MWP) faculty evaluated a random sample of 120 Writing 10 student papers using a rubric in spring 2015.  Out of the 120 papers, 40 were from TRAIL students, 40 from non-TRAIL with library instruction, and 40 from non-TRAIL with no library instruction.  The papers were selected from freshmen who had not previously taken Writing 10.

For the two sub-scales of most interest to the AiA project (use of suitable sources & representing multiple viewpoints with evidence), TRAIL students performed well though not at the level we projected in our measures.  In the area of Source Suitability, 72.5% of TRAIL students scored at Advanced or Developing while 35% of them scored at Advanced or Developing in the area of Argument & Evidence.  Students were close to meeting the target of 80% in the area of source suitability.  In contrast to their peers in non-TRAIL sections, TRAIL students did perform at a higher level.  An analysis of variance (ANOVA) revealed that these findings were statistically significant.

90% will rate the effectiveness of the course in helping them achieve these four skills (#15-17 and 20 on the course evaluation) as very effective or effective.

TRAIL sections in comparison with non-TRAIL sections reported slightly higher means for all four of the course evaluation questions.  This may point to some incremental benefits from the TRAIL curriculum.  For instance, these findings may indicate that TRAIL students practiced reading analysis, topic development, argument building, evidence evaluation, and research ethics at least as much, if not little more often, than their peers.

For more information on the evaluation of TRAIL collaboration through the Assessment in Action (AiA) project, visit the TRAIL library guide.

While there is no "umbrella" policy or governance structure in place for addressing campus research data, progress was made this year in addressing infrastructure needs. Campus IT has rolled out additional storage options and is making headway in addressing network/pipeline issues as well as high performance computing needs. We set up Dash data-sharing service for UC Merced, but researchers who initially committed to depositing their data have yet to do so. We developed a data deposit agreement with an external entity in the region for a research dataset to be deposited at UCM that can serve as a template for future cases. We also initiated a collaborative project with the other UC campuses and gained approval from UC Libraries advisory structure to create a video series aimed at promoting awareness about data management and curation.

The MOU with UC Agriculture and Natural Resources was prepared and delivered to the Provost for signature in January 2015 and is pending Chancellor's signature.

100% of ETDs approved and submitted by Graduate Division will have been accurately processed.

The following modifications to how ETDs are handled and submitted were implemented this year:

While all have been deposited in Merritt repository and those designated for public release have been published to eScholarship, the OCLC Digital Gateway product used to harvest metadata records (and populate WorldCat) has ongoing technical issues. CDL is working with OCLC on a fix so that catalog records for Spring 2015 submissions can be completed.

100% of SCR requests will have been processed in a timely manner.

We are still in the process of evaluating how best to assess the effectiveness of SCR. One hundred percent of requests have been processed in a timely manner, but not all requests were able to be completed due to the nature of the request (exceeds fair use, or technical/format issue that cannot be overcome for digital conversion) or lack of response from the requestor upon further follow-up. 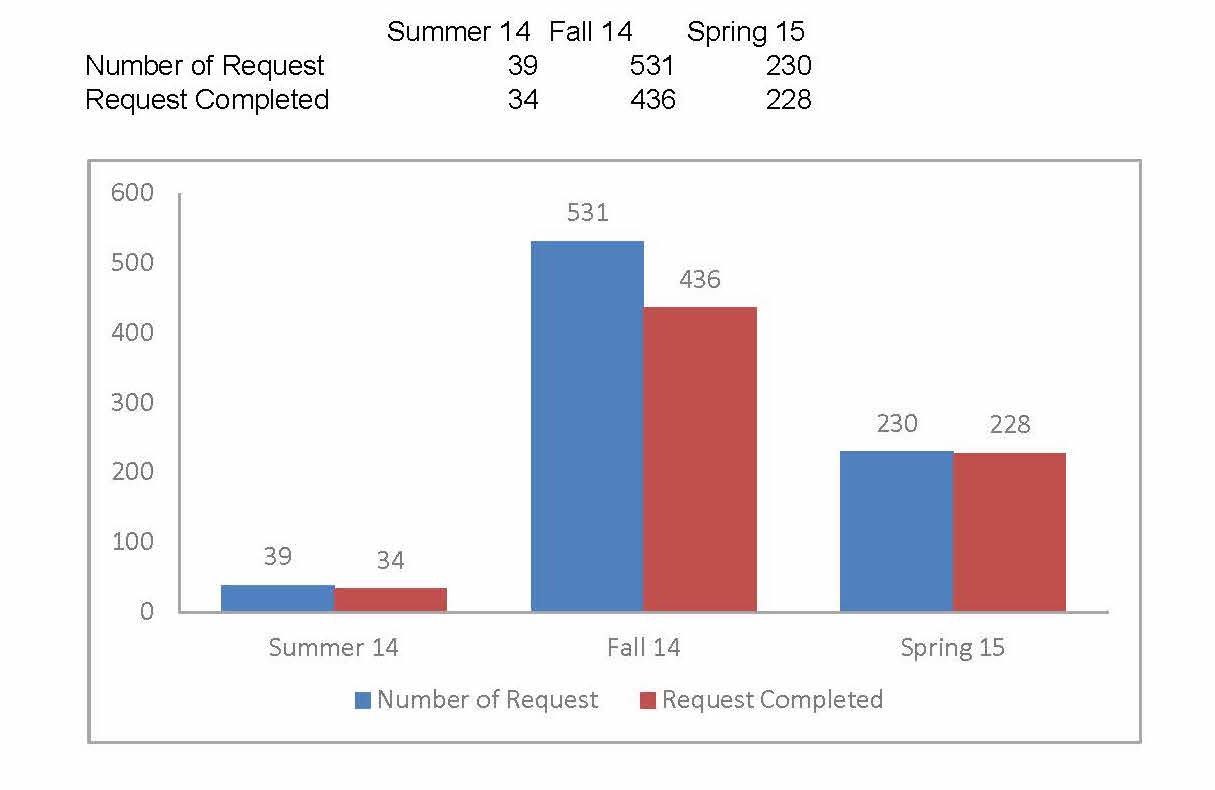 All extant collections have been added to the CDL Nuxeo digital asset management system and will be made available upon the public release of Calisphere in mid-September 2015. These include

Measures: The library will annually compare its opening hours with those of other UC Libraries with the goal of being at or above the UC Systemwide median for total hours open.

This table shows the total number of operating hours, each week, at the main library from each University of California campus.   This excludes libraries having limited or restricted access and does not factor in multiple libraries on each campus that may operate when the main library is closed.

The library will measure building occupancy rates, tying measured occupancies to day of the week, time of day, and library locations. The Library Access Services Unit will conduct daily occupancy counts on nights and weekends; it will conduct weekday counts from 2 to 3 times per semester. The library will analyze this data and consider it in planning the scheduling of operating hours, staffing levels, and furniture acquisition.

The table shows the average number of building occupants at regular intervals throughout the day.  The UC Merced Library is a central location on campus serving multiple functions for faculty, staff and students; these functions create through traffic rendering gate counts unusable.

Building use peaks midday on average and tapers off slowly throughout the evening. The profile of the graph and magnitude of the values are similar to the previous year.

The UC Merced Library will collect data on the number and type of events hosted in the library with the goal of creating a longitudinal record of the use of the library.

Events in the library during FY14-15 by type:

Events in the library during FY13-14 by type: